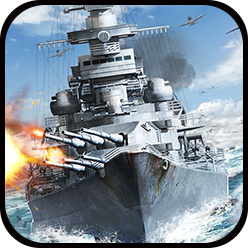 The Akagi-class aircraft carriers were originally battle cruisers. 4 were planned for construction but No. 1 (Amagi) and No. 2 (Akagi) were converted to aircraft-carriers due to the Naval Treaty. The hull of Amagi was extensively damaged in an earthquake so only Akagi was completed. Akagi participated in the attack on Pearl Harbor, and was sunk by the U.S. Navy in the Battle of Midway.

The Yamato-class battleships were designed and constructed by the Imperial Japanese Navy. 4 battleships of the class were planned but only 2, Yamato and Musashi, were completed. The third was converted to an aircraft carrier, and construction on the fourth ship was cancelled. Yamato-class was known for its 460mm guns, the biggest battleship guns in the world at the time.

USS Enterprise was the second of the Yorktown-class aircraft carriers. Her construction started in 1934. Enterprise was launched in 1936 and commissioned in 1938. She took part in a Fleet Problem exercise and was ordered to duty in the Pacific in 1940. She remained in the Pacific after the U.S. Navy’s restructure in 1941.

USS Archerfish was a Balao-class submarine. She was dispatched to provide lifeguard services for the B-29 pilots on their strikes against Tokyo on 9th November 1944. On 28th November, she achieved the first score by sinking the largest aircraft carrier at the time, Shinano. Archerfish received a Presidential Unit Citation after WWII for this.

HMS Prince of Wales was the second of the King George V-class battleship. She participated in the operation to intercept the German battleship Bismarck with the battle cruiser Hood. She also transported Churchill to Newfoundland to create the Atlantic Charter.

The Admiral Hipper-class heavy cruisers were built after Germany was permitted to reject the Treaty of Versailles legally. Germans believed cruisers should be used to operate against merchant shipping, and required the Admiral Hipper class to be large, able to travel long distance and with good firepower and defense. A total of 5 ships were built, but only 3 were completed.